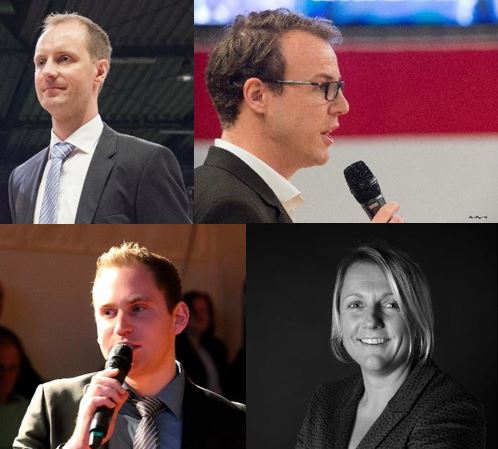 We are proud to announce the judges for the Holland Holstein sHow, to be held on Friday, December 6 and Saturday, December 7, 2019 in the IJsselhallen in Zwolle (The Netherlands). The international judges will put over 200 Holstein and Red Holstein cows in place in their classes on the Saturday. In addition to the cow classes, over 125 Young Breeders will participate in the Young Breeders competitions on the Friday. They will compete in clipping, showmanship and conformation in the junior and the senior classes. On the exhibition floor, there will be many suppliers from the agricultural sector on both days.

Stefan Widmer from Mühledorf (Switzerland) is an enthusiast dairy judge, next to being teacher in livestock farming at the agricultural school Inforama in Zollikofen. Besides that, he runs a family farm in partnership with his parents with dairy cows and growing crops. Since 2002, Stefan judges Holstein, Red Holstein and Brown Swiss cattle on regional and national shows. Internationally, he judged in Luxembourg, France, Portugal, Azores, Czech Republic, Poland, Estonia, Germany and Austria. In Switzerland, he judged the National Holstein show in Bulle (2010), the Open Dairy Show in Bulle (2013) and the Holstein Show on the Swiss Expo in Lausanne (2015). In 2015, he judged the Red Holstein cows at the Holland Holstein sHow. Stefan took part in the Swiss committee for selecting the cows for 3 European Shows. At the European show in Colmar, he was the speaker that got the audience excited through his enthusiasm. This year, Stefan is judging the Holstein cows and the conformation in the Young Breeders classes.

Tjebbe Huybrechts lives in Geel (Belgium) and works for CRV, being responsible for the international breeding-info products. As judge, Tjebbe worked in Belgium and abroad, with Red Holstein and Holstein cows. In Belgium, he was in the ring on many local and regional shows, including the Koe-Expo in Gent and the Night of the Holstein in Libramont. Next to that, he judged in Denmark and Russia. In The Netherlands, Tjebbe judged several regional shows, did the Koe-Expo twice and judged the Holstein classes at the NRM in 2012. In 2018 he judged the HHH-Young Breeders junior show. He enjoyed the huge enthusiasm, the professionalism and the large number of competitors at the show. “The enthusiasm sparkled from the participants and from the audience”, Tjebbe recalls. He looks forward to judge the Red Holstein cows and expects a very high quality.

Torben Melbaum from Haselünne (Germany) works for Masterrind. In Germany, he judged cows several times on regional level and twice on larger shows: Ostfriesland and Hessen. His first international show was in Austria. As Young Breeder, he was national champion clipping in 2014. In 2015 and 2016 he was national champion showmanship in Germany. In 2013 he took second place at the European Young Breeders School in Battice. Torben enjoys working with cows and presenting them on shows. As Young Breeders judge he was active on many shows throughout Germany. Internationally, he judged the Luxemburg Summer Classics and today he will do his first show in The Netherlands. Torben will judge the clipping competition and showmanship in the senior classes.