Erhard Junker and Roger Frossard judge at the HHH 2017 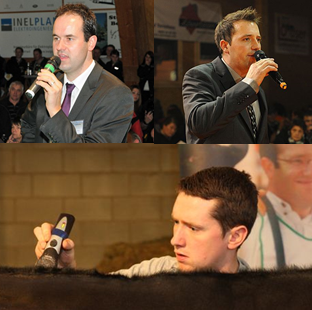 Erhard Junker and Roger Frossard judge at the HHH 2017

The HHH-show is an open National Holsteinshow in the Netherlands. The event is organized by volunteers and takes place at 8 and 9 December 2017. This 27th edition of the show will have a big variation of show items. On Friday the 8th, the Young Breeders will start with their competition; showmanship, clipping and exterior. After the show of our young talents, the Tulip Sale will take place. At Saturday the 9th of December, the Holstein and Red Holsteinshow will get started. Besides, herd collections and an actual presentation of daughter groups, which are held by several companies, will be shown. The conformation of all the animals will be judged by two judges with international allure! Both are dairy farmers with a lot of success themselves as a breeder but also with a lot of experience as judge.

The Young Breeders-show for showmanship and clipping will be judged by Rory Timlin from Ireland. Timlin is a fulltime cowfitter for more than 6 years and works all around the world to prepare cows for big shows. Besides cowfitting, he owns Holsteins, Red Holsteins and Jerseys in partnerships around Europe. On top of that, he is also an experienced judge in Ireland and at the national Jersey show in Finland.

Erhard Junker from Switzerland will be judging both Holsteins and the exterior competition of the Young Breeders. Junkers owns dairy farm ‘Mattenhof Holsteins’ together with his dad and brother and is part time cattle dealer. Junker showed a.o. Cher-Betty, Du Bon Vent Stormatic Atacama en Medicina himself during the National Show. He also sold several well-known cows to other farmers: European Champions Decrausaz Iron O’Kalibra en Suard Jordan Irene. Even the judge carrier of Junker is impressive: multiple times judge at the Swiss Expo.

The Red Holsteins will be judged by Roger Frossard, also living in Switzerland. Frossard runs dairy farm Ptit Coeur together with his wife. The farm held more than 200 animals. Frossards dairy cow ‘DH Gold Chip Darling’ won last Swiss Expo while in 2016 he won the title ‘Best Breeder’ at the National Swiss show. Besides showing his own cows at the Swiss show, he also has been the judge of Swiss shows; both Swiss Expo and Swiss Red Holstein Night.

Having these judges at the Holland Holstein sHow is really an honor! Therefore, don’t miss this show and save the date; 8 and 9 December 2017 at the IJsselhallen in Zwolle!